Home » GENERA I-L » Lapeirousia » Lapeirousia fabricii
Back to Category Overview
Total images in all categories: 9,597
Total number of hits on all images: 4,316,203 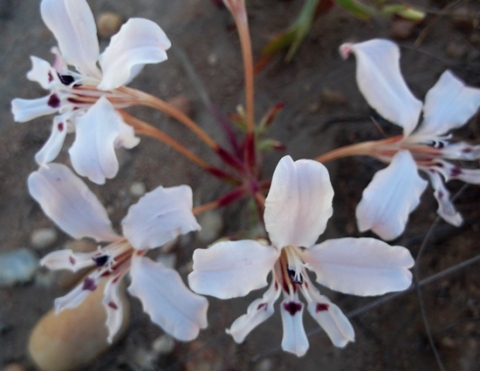 Previous
Image 8 of 36
Next

Lapeirousia fabricii is a geophytic perennial reaching heights from 15 cm to 25 cm. Annual leaves and flowers are produced from the perennial, bell-shaped corm covered in a woody tunic.

The tubular flowers grow in branched spikes, the flowers spirally arranged around the stems. Leaf-like bracts on the stem, crisped upon their keels, subtend the long, thin flower tubes. Flower colour is pale cream or pink. The spreading tepals form a laterally symmetric corolla in the two-lipped flower. The lower tepals are marked red or maroon. They have claw-like appendages near the base of each tepal. Flowering happens in spring.

The plants are found in a broad band from Darling to Namaqualand, endemic to the Western and Northern Cape. The photo was taken in the Gifberg during October.

The habitat is sandy and granite slopes. The species is not considered to be threatened in its habitat early in the twenty first century (Manning, 2007; Manning and Goldblatt, 1996; iNaturalist; http://redlist.sanbi.org).