Home » GENERA I-L » Lapeirousia » Lapeirousia jacquinii
Back to Category Overview
Total images in all categories: 9,636
Total number of hits on all images: 4,331,748 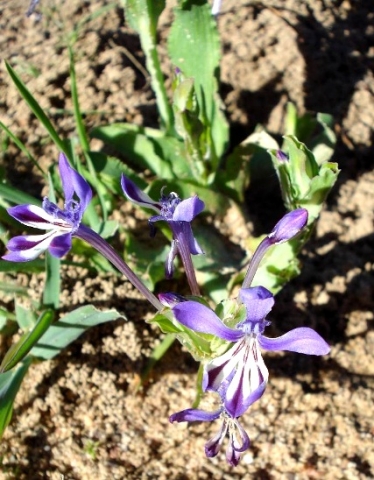 Lapeirousia jacquinii, commonly known in Afrikaans as the perskabong (purple cabong) and the rukkeperdjie (small jolting horse), is a small, cormous perennial reaching heights around 10 cm. The corm is bell-shaped with a woody coat. The common name of cabong, associated with several Lapeirousia species, is derived from the name an early tribe, probably the Nama, gave these plants.

The flowers of L. jacquinii grow in a spike in late winter to early spring. This plant, found flowering near Clanwilliam in August, has blue flowers and not the expected dark purple ones. The corolla has a long, slender tube at the base where the tepals are joined and striped dark and pale blue. The corolla opens in two-lipped shape, the lower tepals positioned closely together are streaked with dark blue and white. The upper tepal is larger than the others.

The species distribution is in the west of the Western Cape extending slightly into Namaqualand in the Northern Cape.

The plants grow on seasonally moist sandy flats. The species is not considered to be threatened in its habitat early in the twenty first century (Manning, 2007; iSpot; Bond and Goldblatt, 1984; www.pacificbulbsociety.org; http://redlist.sanbi.org).