Home » GENERA I-L » Lapeirousia » Lapeirousia jacquinii flower
Back to Category Overview
Total images in all categories: 8,892
Total number of hits on all images: 3,866,578 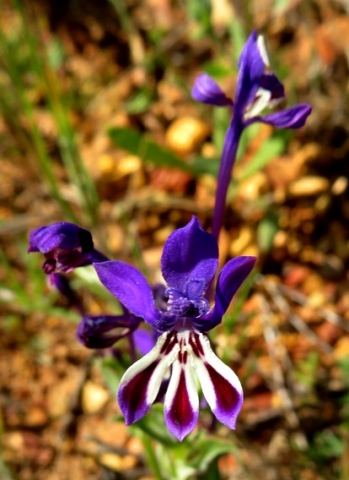 The flower of Lapeirousia jacquinii spreads the six tepals of its two-lipped corolla at the top of a long, narrow tube.

The upper lip is blue-purple. Its biggest, central tepal of the trio is symmetrically shaped, broadest near its acutely pointed tip. Lateral tepals, above and below, are slightly oblique in shape.

The lower lip comprises three similar tepals, slightly narrower than the upper ones, but spectacularly marked in white and dark red, their tips pale purple. The lower tepals are also obovate in shape, attenuating abruptly to acutely pointed tips.

Some of the six curving style tips above the corolla mouth are visible (Manning, 2007; Manning and Goldblatt, 1997; iNaturalist).