Home » GENERA I-L » Lapeirousia » Lapeirousia divaricata, the bride
Back to Category Overview
Total images in all categories: 11,036
Total number of hits on all images: 5,685,893 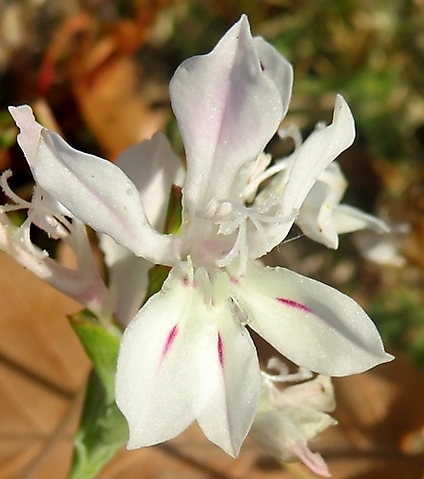 The flower of Lapeirousia divaricata bears its lower, red-lined tepals together, shorter than the uppers and elliptic in shape, ending in small, protruding, pointed tips; a presentable décolletage.

The upper laterals are slender and wavy, not too concerned with the flower centre, like arms waving in jubilation. The overall effect suggests an exultant bride.

The dorsal tepal is dominant like a head, broadened briefly near its erect tip, as if responsible for the equipment of procreation, the white stamens and style that curve out in front of it.

The style is twice divided, first into three branches, halfway up each branch divided again; to each her own (Manning, 2007; Manning and Goldblatt, 1997; iNaturalist; www.pacificbulbsociety.org).