Home » GENERA I-L » Lapeirousia » Lapeirousia fabricii flower and buds
Back to Category Overview
Total images in all categories: 11,018
Total number of hits on all images: 5,656,353 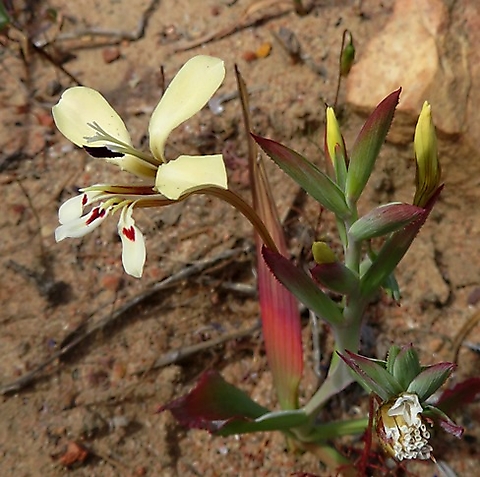 The Lapeirousia fabricii flower buds are lemon-tinged, deeper coloured than the tepals of the open flower from the lower branch. Some plants have deep pinkish red or streaked dark purple on the outside tepal surfaces, conspicuous in bud.

Nothing is visible in the bud stage yet of the notably long corolla tube that appears when the flowers open. The purple-tipped bracts are spirally arranged on the stem, as the flowers are positioned in the spike.

The three tepals of the upper lip are bigger, wider spread and cream, those of the lower lip whiter with dark red markings near the lobe bases. Below these markings there are claw-like appendages curved over the lobe bases, visible in the photo.

The white style is three-branched, each branch split again to form six separate stigmas for pollinators not to miss. Some flowers have minuscule branching in the six stigmas as well.

The white-ringed structure in the bottom right of the photo is a small Ursinia plant fruiting (Manning, 2007; Manning and Goldblatt, 1997).