Home » GENERA I-L » Lapeirousia » Lapeirousia divaricata flower
Back to Category Overview
Total images in all categories: 9,765
Total number of hits on all images: 4,385,405 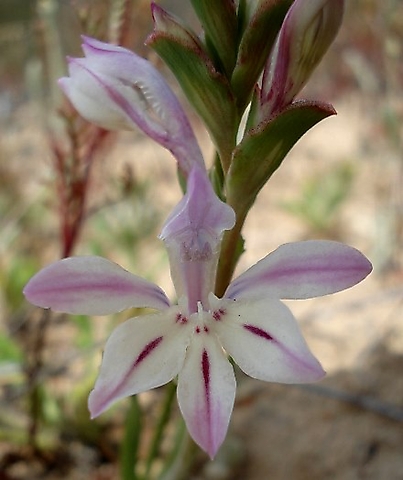 Previous
Image 7 of 39
Next

The fragrant flowers of Lapeirousia divaricata grow spiralling in a spike. The smallish, green bracts with margins red in picture are broadly ovate, folded along their midribs with out-curving tips.

The two-lipped corolla is white or pale pink with purple-red lines down the centre in the middle parts of the lower three tepals. The lower, lateral tepals are markedly broad in the centre, tapering more abruptly to their tips. The dorsal tepal is erect, obovate with slight folding in of the upper part over stamens and style (Manning and Goldblatt, 1997; Bond and Goldblatt, 1984; iNaturalist; www.pacificbulbsociety.org).