Home » GENERA I-L » Lapeirousia » Lapeirousia fabricii flower
Back to Category Overview
Total images in all categories: 11,018
Total number of hits on all images: 5,656,451 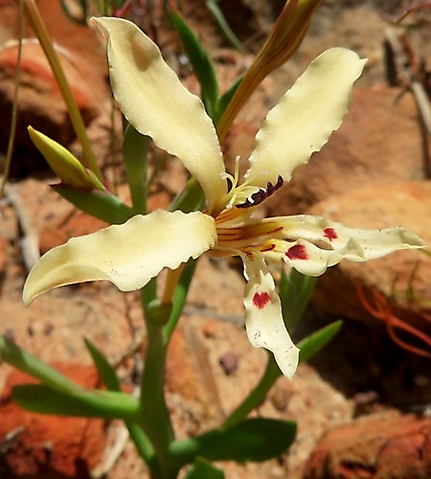 The two-lipped Lapeirousia fabricii flower appears friendly and inviting, more than the common name of catclaw cabong might suggest. This name is bestowed for the curved claw-like appendages on the lower tepals in the corolla mouth, attached about where the dark lines in the tube end.

The upper tepal margins are wavy in some parts, crisped and even sinuate in others. Apart from the dark red blotches low on the lower lobes, the tepals also have brownish lines below the throat on the inside, the same lines seen on the outside of the corolla tube (as in the background).

The twice branched style, first into three, then splitting into six, is exserted above the mouth. The three curved, dark anthers are visible just below the style (Manning, 2007; Manning and Goldblatt, 1997).