Home » GENERA I-L » Lachenalia » Lachenalia splendida
Back to Category Overview
Total images in all categories: 11,037
Total number of hits on all images: 5,688,284 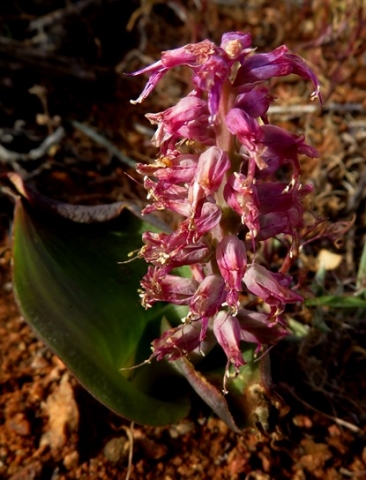 This Lachenalia thought to be Lachenalia splendida was seen in Namaqualand during August after its splendid phase.

L. splendida, in Afrikaans the spogviooltjie (the little boast violin), is a bulbous perennial reaching 25 cm in height. It bears two unmarked, lance-shaped leaves; the lances here short and broad enough to cast doubt upon the identification.

The stalkless, urn-shaped flowers grow on a thick flowering stem. They are blue and bright lilac with brownish tips and exserted stamens.

The plant, a South African endemic, grows in the Western Cape and Northern Cape from Klawer to Garies.

Its habitat is usually quartzite flats. The species is not considered to be threatened in its habitat early in the twenty first century (Manning and Goldblatt, 1997; iNaturalist; http://redlist.sanbi.org).