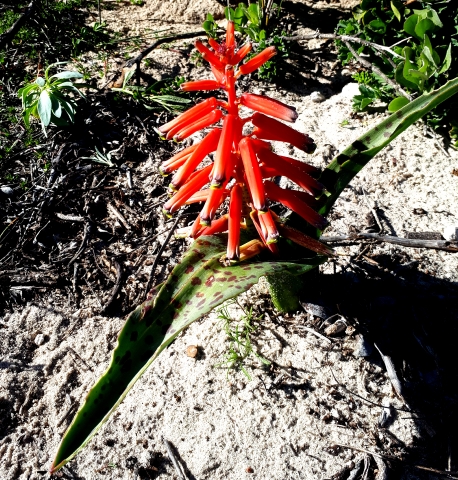 Lachenalia punctata may bear one or two lance-shaped leaves, with or without purple (or darker green) spots on one or both surfaces. When there are two leaves, the lower, bigger one sheathes the other at the base, both curled around the base of the erect flower stem.

The cylindrical, slightly nodding flowers are pink, coral or ruby red. The perianths become 2 cm to 3,2 cm long, the inner three tepals longer than the outer ones. The flowers are sometimes spotted. The ones in picture have some white, black and yellow colouring at the tepal tips, different on the inner and outer whorls. The stamens are concealed inside the perianths until late in the flowering.

Flowering happens in autumn and winter from after the first rain. The photo was taken in August (Manning, 2007; Bean and Johns, 2005; Manning and Goldblatt, 1996; iNaturalist).