Home » GENERA I-L » Lachenalia » Lachenalia rosea
Back to Category Overview
Total images in all categories: 9,759
Total number of hits on all images: 4,380,571 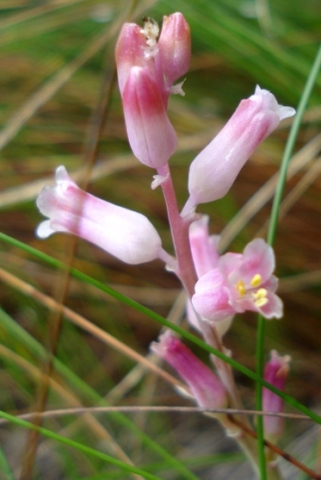 Lachenalia rosea is a deciduous perennial growing an erect flower stem to heights ranging between 8 cm and 20 cm. The flowers are spaced sparsely along the raceme, each fleshy pedicel subtended by a tiny white or pink-tipped bract. Colour variability is common in this species, even on the flowers of the raceme in picture. The upper flowers of a Lachenalia raceme are generally sterile.

This species is distributed from the Cape Peninsula to Knysna on both sides of the Langeberg Mountains, mainly coastally, but also in the western Little Karoo from Barrydale to Ladismith. The plants are typically found growing on damp flats. This plant's future is not considered threatened in habitat early in the twenty first century (Eliovson, 1984; iSpot; Privett and Lutzeyer, 2010; www.redlist.sanbi.org).