Home » GENERA I-L » Lachenalia » Lachenalia rosea flower
Back to Category Overview
Total images in all categories: 10,856
Total number of hits on all images: 5,516,195 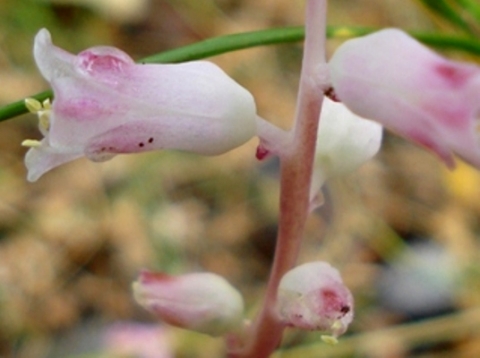 Mention is usually made of the pale pink corolla of Lachenalia rosea, as confirmed by the plant's specific name. The largest parts of the tepals are, however, white or pale blue. This species has a showier name than flowers.

The dull rose to maroon colouring is mostly found on the outside tips of the outer three tepals. The inner tepals become slightly longer than the outer ones, their tips rounded, sometimes translucent and curving outwards just slightly. The corolla may reach a length of 1 cm or nearly that.

The anthers are pale yellow and arrowhead-shaped, visible in the corolla mouth; the stamens arising to two different levels.

Flowering of L. rosea happens from late winter to early summer. This plant was photographed early in November (Eliovson, 1984; Bean and Johns, 2005).