Home » GENERA I-L » Lachenalia » Lachenalia trichophylla flowers
Back to Category Overview
Total images in all categories: 11,037
Total number of hits on all images: 5,688,165 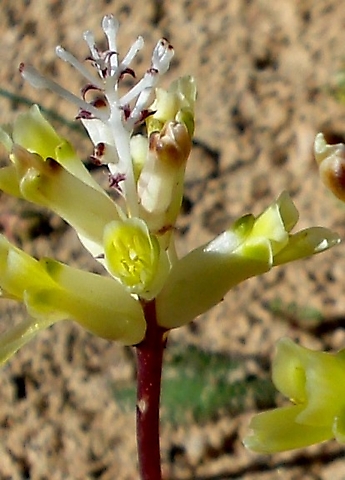 The pale yellow and partly white flowers of Lachenalia trichophylla ascend in the short raceme that in picture aborted the flowers in its top half. The flowers are here densely clustered, their stalks close to absent. The raceme stalk is deep red-brown below, white at the failed tip among the sterile buds.

The gibbosities or swollen patches near the tips of the outer tepals are brown on some flowers, green on others. The anthers are pale yellow, included in the perianth. The short, acutely pointed bracts are strongly recurved and purple here, encircling the stem at the base.