Home » GENERA B » Bonatea » Bonatea boltonii flower
Back to Category Overview
Total images in all categories: 11,894
Total number of hits on all images: 7,136,451 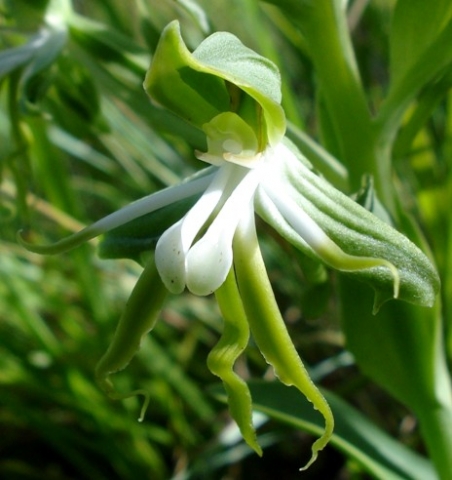 The flowers of Bonatea boltonii grow in a somewhat lax cylindrical spike. Each green and white flower has its median sepal flanked by the two posterior petal lobes to form the green helmet-like structure at the top of the flower. This markedly concave hood has an acutely pointed tip conspicuously turned up and some longitudinal ridges along its surface.

At the base of the flower the three narrow green lobes of the lip point downwards, oblong in shape with variously curving narrow tips. The central lobe has the angular bends characteristic of the Bonatea genus.

On the sides of the flower both the narrow white anterior petal lobes and the broad green sepals spread, the sepals positioned a little lower. The lateral petals pointing forward and outwards curve in their green upper parts. In this photo only one of the two green lateral sepals is visible (on the right); some folds upon its surface.

The small rostellum in the centre is three-lobed (serving to keep the anther and the stigma apart). The anther is erect and the two conspicuous stigmatic arms projecting forward in the centre end in stigmatic pads, the flat, white, sticky disc-like tips.