Home » GENERA B » Bonatea » Bonatea boltonii
Back to Category Overview
Total images in all categories: 12,068
Total number of hits on all images: 7,360,702 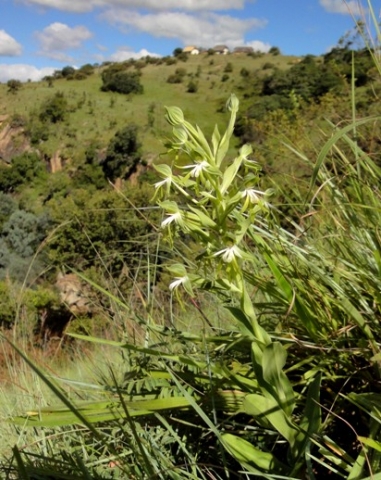 Previous
Image 4 of 15
Next

Bonatea boltonii is a tuberous perennial that may be either erect or decumbent. It grows from oblong tubers, usually reaching heights between 10 cm and 75 cm. The genus, sometimes referred to as wood orchids, has similarities to Habenaria.

The species distribution is widespread in the eastern, summer rainfall parts of South Africa, from Grahamstown in the Eastern Cape to Polokwane in Limpopo.

Its habitat is diverse, including grassland, bushveld and coastal dunes, occasionally forest margins and Albany thicket as well, from sea level to 1900 m. The species has a stable population, not considered to be threatened in its habitat early in the twenty first century (www.africanorchids.dk; www.redlist.sanbi.org).