Home » GENERA B » Bonatea » Bonatea antennifera
Back to Category Overview
Total images in all categories: 12,068
Total number of hits on all images: 7,360,625 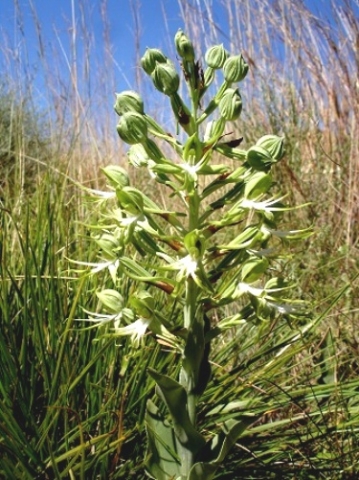 Bonatea antennifera, a ground orchid, belongs to a genus of mainly terrestrial herbs with tuberous roots. This plant was previously known as B. speciosa subsp. antennifera. In this species the erect flower stalk grows from a flattened tuber in autumn. The leaves are broad and longitudinally lined, forming sheaths around the stem.

In late autumn when blooming is concluded, the oblong, ribbed fruits can be seen on the stalk. Many tiny seeds will eventually be dispersed, but only few plants will grow, as the conditions for germination are not easily met.

B. antennifera grows in medium to dry grassland, but commonly in shade near or under trees. The distribution is Gauteng, Limpopo, North West and Northern Cape. It is seen on the Witwatersrand, for instance on the Melville Koppies where this specimen was photographed in February. It is also common in parts of the Magaliesberg and occurs in the Waterberg (Germishuizen and Fabian, 1982; Letty, 1962; Lucas and Pike, 1971).