Home » GENERA B » Bonatea » Bonatea antennifera flower
Back to Category Overview
Total images in all categories: 12,068
Total number of hits on all images: 7,360,713 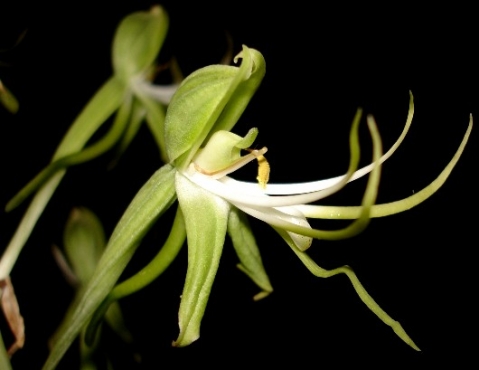 Seen in profile, several floral parts of Bonatea antennifera are on display:

The large green elongated upside down bowl or hood at the top is the median or dorsal sepal. At its tip it discloses that the two narrow posterior or upper petal lobes adhere to its rim, their tips curling together and free. These three components together form the pointed hood.

The other two petal lobes, the anterior ones positioned lower and pointing forward, are long, thin, curving and white with green tips. They are the outside pair of curving parts on the right in the picture.

The inner two thin protrusions that are longer (and straighter), are the lateral lobes of the lip. The lip has a third lobe, the central one being the thin and flat, pale green part that points down to the right and has an angular bend, plus some curves along its length.

This three-lobed lip is at the bottom of the flower, because the whole flower twisted around through 180˚ as the bud matured. Those orchids that do this are called resupinate; there are also many orchids that don’t twist.

Evidence of the twist is seen in the ridges on the long, thin and angular ovary at the back of the flower (at the bottom left). When the flower fades, only this green ovary will persist, housing the growing seeds until ripe.

The lip has a fourth long, thin protrusion, the green spur at the back of the flower near the ovary.

In the centre below, the two broad and tapering lateral sepals point downwards. They have uneven green surfaces appearing to be channelled.

Above these sepals in the flower centre, the smaller, vital parts where the seed production will take place are situated. Here the second, smaller cream-coloured hood-like structure or rostellum can be seen. This is where the erect anther and two pollinaria are housed, separate from the sticky disc, the viscidium on each of two slender stigma stalks, to prevent self-pollination (Lowrey and Wright, 1987; Wikipedia).