Home » GENERA B » Bonatea » Bonatea polypodantha
Back to Category Overview
Total images in all categories: 11,894
Total number of hits on all images: 7,136,435 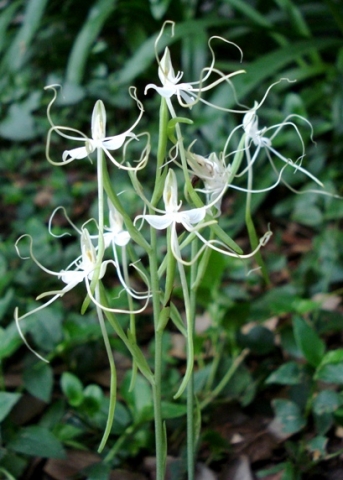 Previous
Image 7 of 15
Next

Bonatea polypodantha is a small terrestrial orchid growing from oblong, tuberous roots. The plant produces two to four large, elliptic leaves at the stem base. The leaf has a slight, visible fold along its midrib; the margins are entire, the apex a pointed tip.

The species, a South African endemic, is distributed widely across South Africa, although probably not much seen as it is not often mentioned. The plants grow in the shade of trees and thickets in plant detritus, often near streams. They are found at elevations ranging between 550 m and 1500 m in cool conditions. The species is not considered to be threatened in its habitat early in the twenty first century (www.orchidspecies.com; Wikipedia; www.redlist.sanbi.org).