Home » GENERA B » Bonatea » Bonatea speciosa
Back to Category Overview
Total images in all categories: 12,068
Total number of hits on all images: 7,360,575 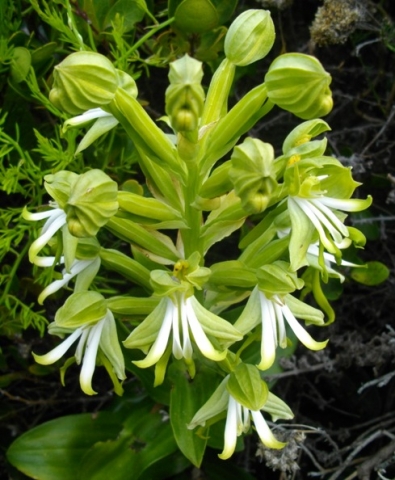 Bonatea speciosa or the green wood orchid is a terrestrial orchid, a tuberous perennial, belonging to a small genus of about twenty species in Africa, two of which are found in the fynbos and one in Gauteng.

The green and white flowers are produced in profusion on the erect spike of up to 1 m, almost all the year round, although the plant is called Oktoberlelie (October lily) in Afrikaans. The flowers are pollinated by long-tongued hawk-moths.

The species distribution is from the Cape Peninsula all along the eastern coast of South Africa to Mozambique and Zimbabwe, usually in sandy soil in the scrub. The species is not considered to be threatened in its habitat early in the twenty first century (Bean and Johns, 2005; www.redlist.sanbi.org).