Home » GENERA B » Bonatea » Bonatea antennifera
Back to Category Overview
Total images in all categories: 12,068
Total number of hits on all images: 7,360,685 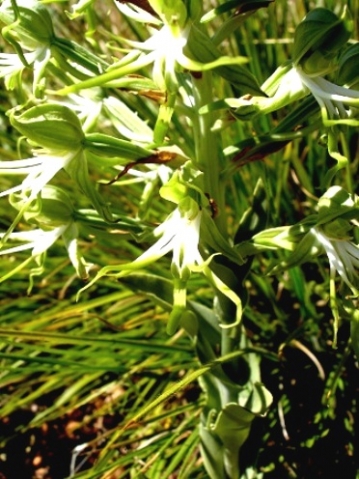 The flowers of Bonatea antennifera grow on a stout, erect stalk that may become 1 m tall. It often keels over or inclines at an angle before the flowering is done. The flowers are green and white, their complex structure appearing spidery or like a praying mantis.

The sepals or outer whorl of three segments of the perianth are green. The dorsal sepal widens into a shallow, boat-shaped bowl in an upright position and forming the hood at the top of each flower. The lateral, reflexed sepals are shaped quite differently: They are narrow and wavy, tapering to acute tips and have been likened to streamers.

Among the three inner segments of the perianth, the petals, there are also two narrow, spoon-shaped white protuberances, parts of the stigma. They are shorter than the petals and have the stigmatic surfaces where the pollen has to be deposited positioned at their tips. The two lateral petals, angularly folded, are long and thin, their upper lobes hardly visible against the rim of the hood, the lower lobes protruding conspicuously next to the lateral lip lobes.

The third petal or lip is narrowly three-lobed and attached to the column formed by stamens and style. The twisting ovaries at the flower base are almost obscured by long membranous bracts.

As if the flower does not have enough embellishment yet, there is also a green, tubular spur, nearly 4 cm long, growing from the base of the flower lip. This spur has a notable bulge at its tip (Germishuizen and Fabian, 1982; Letty, 1962; Lucas and Pike, 1971).