Home » GENERA B » Bonatea » Bonatea saundersioides all green and white
Back to Category Overview
Total images in all categories: 11,894
Total number of hits on all images: 7,136,493 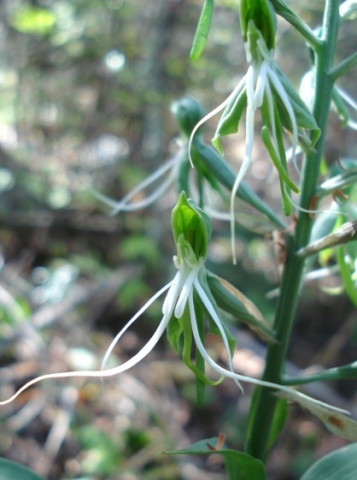 The green and white flowers of Bonatea saundersioides grow in lax racemes of about 15 cm in length, each subtended by a small, thin bract.

The hood or dorsal sepal (to which the two narrow upper lobes of the lateral petals are added, sticking to its sides), is positioned at the top of the flower. It has a narrow helmet-shape ending in a distinctly pointed tip.

Below the hood eight slender protrusions normally found on Bonatea flowers are situated. They differ much, unlike the eight feet of a spider: The two lower petal lobes, white and diverging to the flanks are shorter than the two long (up to 3 cm), white lateral lobes of the lip.

Between these two white lateral lip lobes that in picture bend outwards halfway down their lengths, the lip has a third, central lobe that is green, flat and angularly bent. And still more: emerging downwards from the lip base, there is a green spur, a fourth member of the lip that hangs down. In picture the spur is straight and darker green than the central lip lobe close to it.

Lastly the two lateral sepals, green and broad but tapering to their tips, are also visible in the lower part of the flower flanks.

Not counted are the two shorter, white, forwardly protruding stigma arms that would make the elongated flower features ten, beyond the boast of a standard, leggy spider.

After inspecting all these diverse parts, the thick, green ovary at the back will also have been noticed. It also serves as part of the pedicel of the flower (Pooley, 1998).