Home » TYPES » Bulbs » Wachendorfia paniculata without dark tepal markings
Back to Category Overview
Total images in all categories: 10,366
Total number of hits on all images: 5,069,181 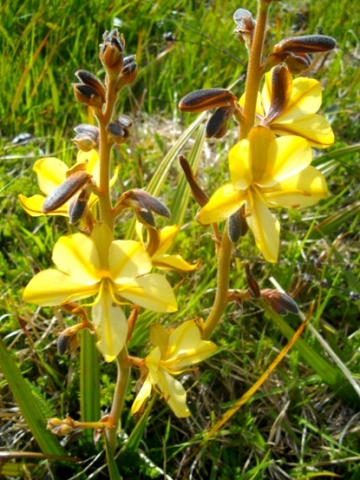 This Wachendorfia flower photographed in September at Onrus may be W. paniculata, but it lacks the dark markings at the upper tepal bases, seen on some of the flowers of this species. Those markings are, however, said not to be always present. The flowers have sideways spreading stamens, one in the same direction as the style, the other two opposite them. The tepals have a more yellow colouring than seen on other W. paniculata flowers shown in this Album that are pale apricot in colour.

The other Wachendorfia species that occur in the Hermanus area are the smaller W. multiflora with narrow tepals, green bracts and leaves longer than the flower stem and W. brachyandra with short, clustered stamens (Bean and Johns, 2005; Manning, 2007; www.pacificbulbsociety.org).