Home » TYPES » Bulbs » Wachendorfia paniculata
Back to Category Overview
Total images in all categories: 10,330
Total number of hits on all images: 5,026,200 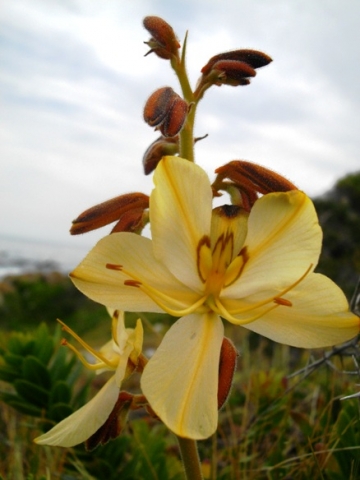 The flowering stem is erect, there are papery bracts and the flowers are light yellow to apricot in colour with brownish markings at the base of the upper tepals. There is also a marked darker yellow line running down the centre along the length of each tepal. Two stamens are sharply turned to one side and the third together with the pistil to the other. The buds are red brown before opening.

The rhizome is red right through; more than one of the four Wachendorfia species in the winter rainfall area of South Africa is called rooikanol in Afrikaans due to this feature. The plant is said to flourish after fires.

The plant’s natural distribution ranges from the Clanwilliam area where different colour forms are found, down to the Cape and eastwards to the Eastern Cape. The habitat is sandy and stony soils in moist places. This plant was photographed at Vermont near Hermanus in October (Bean and Johns, 2005).