Home » TYPES » Bulbs » Wachendorfia paniculata panicle
Back to Category Overview
Total images in all categories: 11,020
Total number of hits on all images: 5,659,794 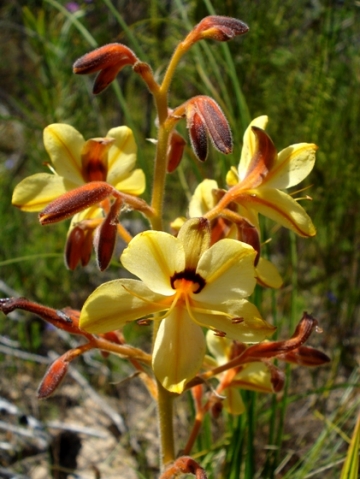 This many-flowering, open panicle of Wachendorfia paniculata represents the culmination of growth when conditions and resources bring abundance. The dark markings on the upper tepals of the open flowers, in this case forming a curve resembling the pincers of a scorpion, present yet another appearance among the interesting flower variations.

The hairy, orange outer surfaces of the narrow buds have variable dark patches near their tips. It seems as if only the top tepal of the outer three fully retains the colouring seen on the buds before opening; the others have only darker central bands on the outside that show through inside. The lateral tepal parts are similar on both surfaces.

Small bracts, broad and short, are visible near the top of the stalks or at the base of the buds (Manning, 2007).