Home » TYPES » Bulbs » Wachendorfia paniculata yellow with red markings
Back to Category Overview
Total images in all categories: 11,020
Total number of hits on all images: 5,659,735 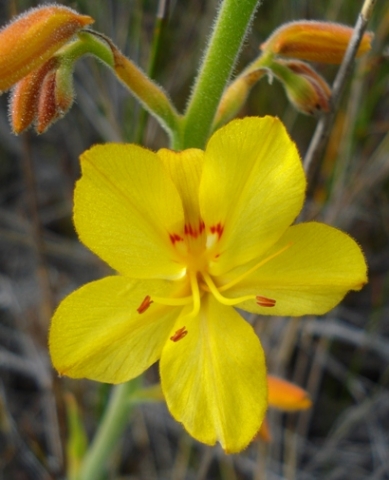 Although the Wachendorfia genus officially seems to comprise only four species and Wachendorfia thyrsiflora identification is easy, considerable debate is generated around separating the other three. Are there only three or as many as three?

Speciation is characterised by hotspots and turning points. Wachendorfia may be in such a phase, making history in our time. So no surprise that the W. paniculata photos in this Album show variability in flower form. The W. paniculata flower shown here is marked red in irregular squiggles, notably centralised only on the inner sides of the lateral upper tepals (plus the central one). Some slightly pale areas occur immediately below the markings as well.

Such markings on flower corollas have both intraspecies and interspecies differences, i.e. are only sometimes useful in differentiating between species.

Enantiostyly is the phenomenon on display here by which the stamens diverge, the style accompanies one anther and the other two being deflected to the opposite side. This phenomenon is more common than one might think, occurring in at least twelve flowering plant families and many of their genera. Outcrossing and self-pollination are involved; the phenomenon is complex, much discussed and researched, for those wanting to pursue yet another interesting topic in the botanical literature (iSpot; Wikipedia; www.plantsystematics.com).