Home » TYPES » Bulbs » Welwitschia mirabilis
Back to Category Overview
Total images in all categories: 11,026
Total number of hits on all images: 5,667,150 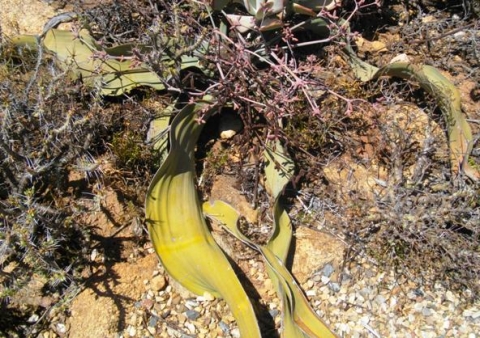 Welwitschia mirabilis, the tweeblaarkanniedood (two-leaf-cannot-die in Afrikaans), lives in some of the earth’s most extremely arid conditions for periods of 500 to 2000 years. Indeed an unusual lifespan for any plant barring some of the big tree species like Podocarpus or Sequoia!  These trees also belong to ancient conifer families as the Welwitschia does.

Some features of this plant appear to resemble succulents, trees or caudiciform plants, while overall it fits into none of them.  Botanically the species resides in its own separate genus, also the sole member of its family, the Welwitschiaceae that houses the monotypic genus. This is regarded as one of the most unusual plants on earth. A living fossil from Jurassic times.

In its young days as a species, maybe 80 million years ago, W. mirabilis may have been eaten by dinosaurs, as its leaves are eaten today by some animals in its Namibian and Angolan coastal desert habitat. This environment is known for its heavy fog, where air cooled by the cold Benguela Current of the west coast meets the hot air from the Namib Desert. This generates fog equivalent to an annual rainfall of 60 mm.

The metres long leaves of W. mirabilis absorb moisture from both surfaces. In addition, the big taproot reaches down to 30 m into the sand to gain additional moisture from subterranean sources (www.plantzafrica.com and www.namibweb.com).