Home » TYPES » Bulbs » Welwitschia mirabilis female cones
Back to Category Overview
Total images in all categories: 11,026
Total number of hits on all images: 5,667,158 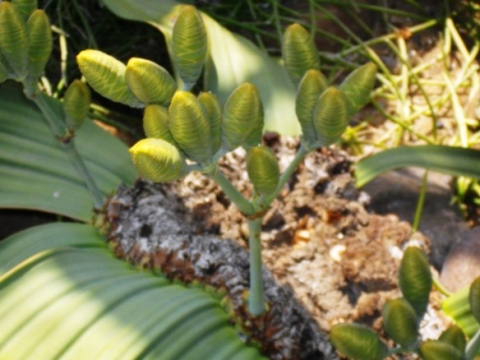 The female cones of Welwitschia mirabilis shown here were photographed in the greenhouse at the Botanical Garden of the University of Stellenbosch. As the plant is dioecious this specimen will not produce male cones at all.

The female reproductive cones contain the pistillate flowers consisting of a tubular perianth and an exposed ovule. They are probably pollinated by wasps that visit both male and female cones for the small amounts of nectar produced there as their reward. These female cones mature in spring with viable seeds, about nine months after fertilization (www.plantzafrica.com and Wikipedia).