Home » TYPES » Bulbs » Scadoxus puniceus leaves
Back to Category Overview
Total images in all categories: 11,110
Total number of hits on all images: 5,776,829 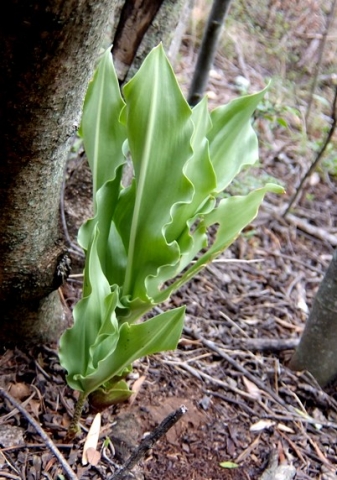 These Scadoxus puniceus leaves on their brownish to purple-spotted false stem or pseudostem were seen under a tree in the Magaliesberg during January.

The plant forming part of the Amaryllidaceae family produces annual leaves from a perennial rhizome. The erect rhizome of up to 2 cm tall is bulbous in its upper part, about 10 cm in diameter.

The large, ovate leaves are nearly erect. They sheathe each other at the base, collectively forming the pseudostem varying much in length, from 3 mm to 40 mm. The wavy, entire leaf margins taper to acute tips. There is a thick keel or midrib down the centre of the pale green blade that is faintly, longitudinally furrowed (Manning, 2009; Duncan, et al, 2016; Duncan, 2010; Van Wyk and Malan, 1997).

(Photos by Ricky Mauer of this plant are posted in the eponymous Plant Record elsewhere on this Site.)