Home » TYPES » Bulbs » Scadoxus multiflorus subsp. katharinae leaves and flowers
Back to Category Overview
Total images in all categories: 11,923
Total number of hits on all images: 7,173,481 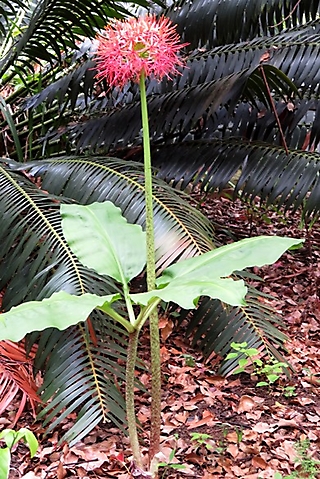 The foliage pseudostem and inflorescence of Scadoxus multiflorus subsp. katharinae are separate and erect. It looks as if they bask in homage paid by glossy cycad leaves, deferential in their bowing before the flowers here in Kirstenbosch.

These Scadoxus plant components are juxtaposed like two separate production units of one functional factory. The one, the leafy stem produces glucose for energising the plant and oxygen as an unintended by-product released into the air, sustaining life in many forms. The other stem produces flowers, an intermediate product en route to setting seed for sustaining the species by delivering new plants to replace the old.

There is a third, invisible but vital component of this living system, attached underground, out of sight: The bulb and rhizome of the plant are nutrient storage facilities with roots for gathering nutrients and moisture from the soil.

The bulb part, covered in a thin papery tunic is about 5 cm long and up to 10 cm in diameter, solitary or forming offsets in vegetative propagation. The rhizome below the bulb, a different kind of storage organ, has roots that spread horizontally. Perhaps having both bulb and rhizome constitutes an evolutionary transition stage. Check the plant's habit in a couple of million years!

The integrated, metabolising organism comprises very different complementary, functional components. This is an evergreen plant following a growth cycle that peaks in summer. The photo was taken in Kirstenbosch during February (Duncan, et al, 2016).