Home » TYPES » Bulbs » Scadoxus puniceus
Back to Category Overview
Total images in all categories: 11,110
Total number of hits on all images: 5,776,742 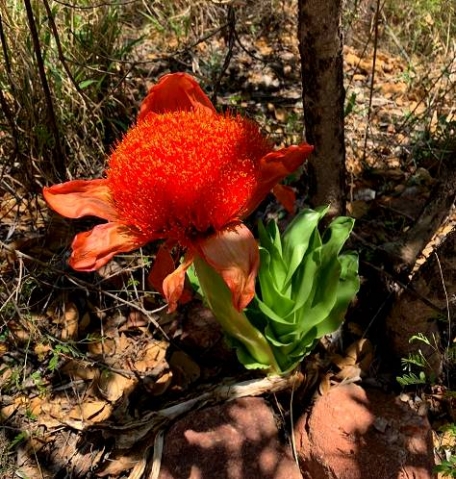 Scadoxus puniceus is a variable, summer-growing geophyte reaching heights from 30 cm to 1 m. It is commonly known as the paintbrush or the paintbrush lily, names shared with some Haemanthus species.

The scape or peduncle bearing the inflorescence and the pseudostem bearing the leaves grow beside each other from the rhizome. They are jointly sheathed at the base by short, spotted scale leaves.

After flowering, the ovaries enlarge into a cluster of globular berries 1 cm in diameter, changing colour from green to orange or dark red as they ripen.

The species is distributed widely from the provinces north of the Vaal River, KwaZulu-Natal and the Eastern Cape to the southern Cape coast as far west as Bredasdorp. This is the most widespread of the three South African Scadoxus species. It also grows beyond the border in parts of tropical Africa as far as Ethiopia.

The habitat varies from grassland and thicket to bushveld, from full sun to light shade, from the coast to elevations around 2100 m and from sandy to rich loamy soils, sometimes in rocky places. The species is not considered to be threatened in its habitat early in the twenty first century (Duncan, et al, 2016; Manning, 2009; iNaturalist; http://redlist.sanbi.org).