Home » TYPES » Bulbs » Scadoxus puniceus inflorescence
Back to Category Overview
Total images in all categories: 11,506
Total number of hits on all images: 6,492,064 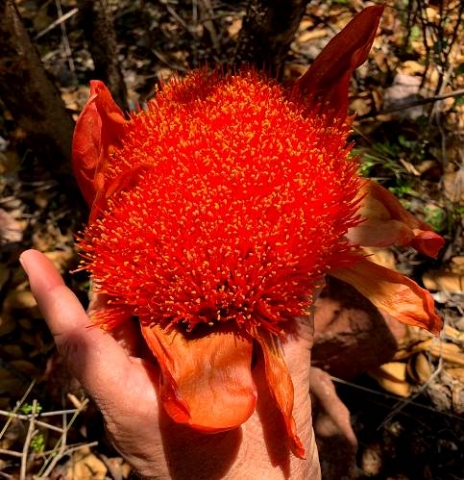 The flowerhead of Scadoxus puniceus is a dense, brush-like umbel from 5 cm to 15 cm in diameter.

Its peduncle is sturdy, erect to nearly so, growing beside the leaf-bearing pseudostem. The peduncle is pale green with or without red-brown spots near the base, becoming from 12 cm to 75 cm tall.

The five to eleven spathe bracts at the top of the peduncle spread freely around the bunched florets. They are broadly lance-shaped to ovate, varying in colour from brown or red-brown to pale green and translucent with dark veins. The bracts may be shorter or longer than the florets, from 2,5 cm to 10 cm long and from 1,5 cm to 5 cm wide.

The colouring of the soft, upper floral mass, flattish topped to slightly dome-shaped, is often scarlet to crimson or carmine, occasionally white or pale yellow. This is apart from the yellow specks of the anthers of each individual floret on their exserted filaments. The style of the floret is coloured similarly to the perianth and the filaments.

Each floret consists of a narrowly funnel-shaped to cylindrical perianth tube, its tepals narrow. The ovoid ovary below the rest of the floret is pale green, up to 3 mm long. The pedicels of the individual florets are pale green, from 2 cm to 3 cm long and erect at flowering time; later spreading as they give space to the fruits.

Flowering happens over a long season; depending on the region this may occur from midwinter to early autumn (Duncan, et al, 2016; Manning, 2009; iNaturalist).