Home » GENERA A » Aloe » Aloe marlothii flowering at Worcester
Back to Category Overview
Total images in all categories: 11,506
Total number of hits on all images: 6,493,890 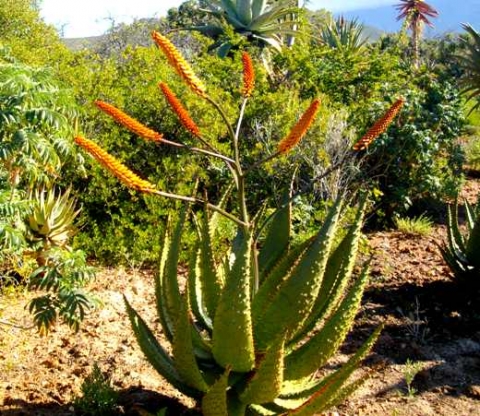 The large, but slender panicle comprising seven angled racemes presents a typical Aloe marlothii inflorescence. The orange perianths or individual flowers are densely clustered and angled down towards the stems. These flowers appear differently coloured, depending on the angle of their raceme in the sunlight. The flowers are often secund, positioned predominantly to one side of the raceme stalk rather than being distributed cylindrically around it; in the photo they tend to face upwards.

The peduncle branches are so long that the flowers are spread more widely than the in-curving leaves of the large rosette. The leaf spines are conspicuous, scattered along the green surfaces. Often glaucous to grey-green, this yellow-green leaf colour variety is also common.

This plant is thriving far away from home. It was photographed in the Karoo Desert National Botanical Garden at Worcester in June. The natural A. marlothii distribution in South Africa lies only in the northeast, north of the Vaal River (or near it) and in KwaZulu-Natal (Reynolds, 1974).