Home » GENERA A » Aloe » Aloe maculata X striata hybrid
Back to Category Overview
Total images in all categories: 11,923
Total number of hits on all images: 7,173,581 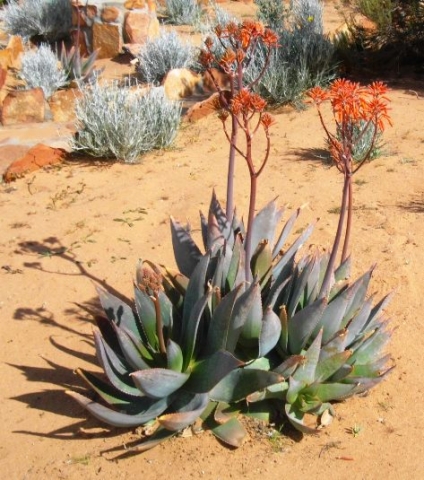 These Aloe maculata X striata hybrid leaf rosettes adorn the lodge garden at Kagga Kamma in the Ceres Karoo, probably planted there. Happy in the open in sandy soil, the lush plant has multiplied its rosettes well, flowering in September.

The blue-green leaves with some faint purplish near their tips usually have pale surface spots and even or regular toothing, small and sharpish along the margins.

Both the spots and teeth originate from the A. maculata parent plant, A. striata having neither. Pink leaf margins and frequent branching of the inflorescence come from A. striata.

The capitate or flat-topped inflorescences start off with green-brown buds. The open flowers appear in several shades of red without yellow colour change of perianths when they open, although some altogether yellowish flowering forms occur. The open perianths nod, some of the buds starting off erectly in each compact head. Flowering happens from autumn to spring.

Reynolds names seven Aloe species that have been recorded as hybridising with A. maculata, or A. saponaria as it was still called in his time. He anticipates that there may be more. A. striata is among the seven, bringing about a popular, much planted and quick growing cross (Reynolds, 1974; Van Wyk and Smith, 2003).