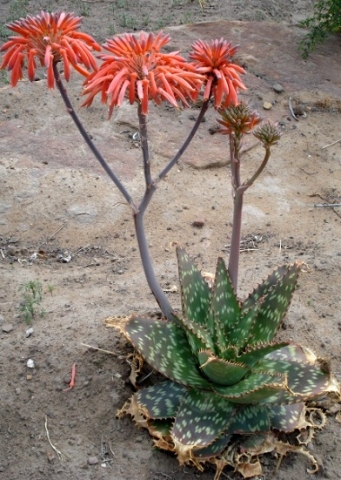 The flat-topped (capitate as opposed to conical) raceme of Aloe maculata also occurs in some other spotted, stemless aloes. They include A. affinis, A. petrophila, A. prinslooi, A. swynnertonii, A. umfoloziensis and A. vogtsii. Several of those have much narrower or less spotted leaves and more branches in the panicles. Some also have very localised, small distributions, unlike A. maculata, previously known as A. saponaria. A. maculata was described by Reynolds (1974) as the most variable among the spotted aloes.

The plant in the photo shows signs of a comparatively easy life, with little evidence of the characteristic dried out leaf tips. The primary panicle in the inflorescence seen here has three racemes in full bloom. The bulge at the base of the perianths is clear to see, as are the papery bracts at the peduncle branching points and higher up. The secondary panicle is smaller, the buds still developing. The perianths hold their colour throughout flowering (Reynolds, 1974; Van Wyk and Smith, 2003).