Home » GENERA A » Aloe » Aloe longistyla fruit capsule husks
Back to Category Overview
Total images in all categories: 11,538
Total number of hits on all images: 6,618,698 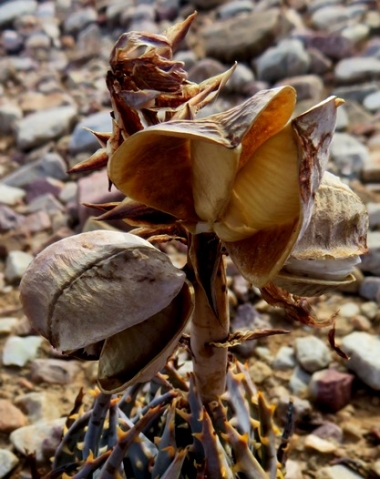 The dry, pale brown, rounded husks of Aloe longistyla fruit capsules have opened here, displaying some pale and empty inner partitioning. The upper capsule in view has lost one of its three covering parts, leaving a big gap on the camera side.

Although A. longistyla is a comparatively small plant, these fruit capsules are large, as are the seeds, already dispersed. The perianth tubes or flowers of this plant are also large.

The peduncle of the inflorescence is thick, surprisingly so for its limited length. Some dark brown, acutely pointed, dry bracts are visible on the stem. A bract earlier subtended each individual flower, while a few sterile ones grow on the stem below the flowers, still protruding from this stalk (Vlok and Schutte-Vlok, 2010; Van Wyk and Smith, 2003; Reynolds, 1974; Jeppe, 1969).