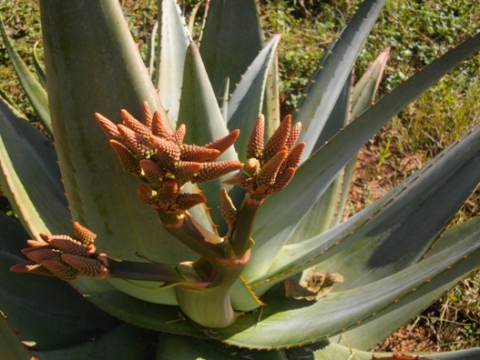 The robust base of the peduncle of this Aloe marlothii (or hybrid) inflorescence is flattened along the line from which it emerged or is emerging between two leaf blades. The multiple racemes covered in compact cones of dull pink and green buds are fleshing out on the branch tips of the large panicle promising quite a festive show; probably in orange or nearly red flowers.

These racemes and their buds have lost the early flattened shape that came from the force involved in their appearance. In a week or two the lowest perianth on every raceme will open, nod from its pedicel, change colour, exsert its stamens and produce nectar, enticing bird and insect to participate in pollination rituals benefiting all concerned with this little pact of coexistence.

A. marlothii inflorescences need a few days free from cold spells to add solidity to the branches of the peduncle; all a matter of timing. If the very young and soft branches of such an inflorescence freeze overnight, the limp, aborted racemes will be lying draped helplessly and hopelessly over the leaves, never to open. There is a secondary inflorescence emerging a little lower down on this plant. Its prospects appear doubtful.

Note the differences in size and shape of the sterile bracts visible at the various branching points on the panicle.