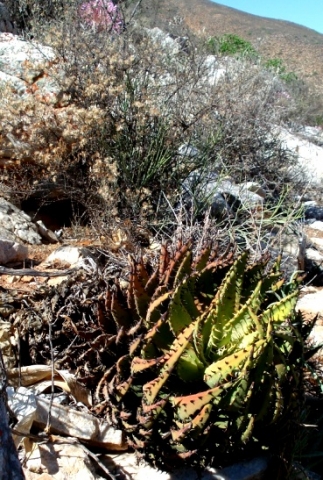 The stemless or short-stemmed rosette of Aloe melanacantha may be single as here, or form groups of up to about ten. Dry leaves are seen persisting low down on this old plant with procumbent stem, enjoying full sun for many years already among its protective rocks.

The narrowly triangular leaves curve inward, creating a well-rounded shape with emphasis on the daunting black spines. The spines may be straight, curve inwards or spread; everything possible to keep destructive forces at bay. Melanacantha means black thorns. The leaf colour is dull yellowish green to dark green.

To find A. melanacantha in habitat one has to travel to the coastal area of the Northern Cape or the north-western corner of the Western Cape, from Nieuwoudtville to the Gariep River. Namibians will also find it near the coast just north of the River. The habitat is sandy soil and rocky slopes, such as seen in this photo. The species is not considered to be threatened in its habitat early in the twenty first century.

This is one of four aloes first recorded during Simon van der Stel’s Namaqualand trip of 1685.

The plant should be left in habitat as it usually dies when conditions deviate from the normal (Van Wyk and Smith, 2003; Reynolds, 1974; http://redlist.sanbi.org).