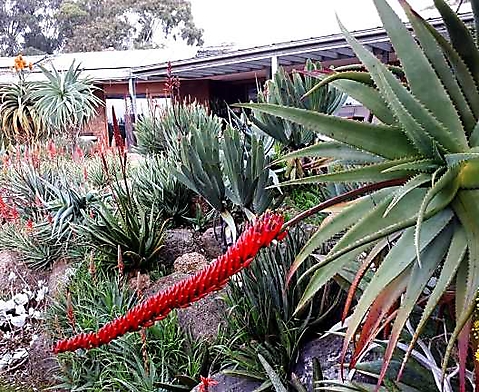 Aloe mawii is not South African, a large, tropical aloe that branches at the base or higher up, reaching 2 m in height; sometimes single-stemmed. Stemless plants occur, while colonies are sometimes formed from suckering at the plant base.

Of interest is A. mawii’s accepted relationship with two South African aloe species: A. marlothii also bears panicles of angled to horizontal racemes, while A. globuligemma has both angled racemes and secund flowers, turned to one (the upper) side of the stalk only.

Large rosettes of many succulent leaves are grown. The long, narrow leaves are flat to slightly concave on their upper surfaces, convex below and curving down. There are well-spaced marginal teeth but no spines on the smooth blades that are up to 10 cm wide at the base and up to 60 cm long.

Leaf colour is blue-green in shade, in cool conditions or on young, lush leaves; reddened in full sun, heat and drought. Young leaves may have scattered spots on both surfaces. The margins and leaf-tips tend to be reddish, the triangular teeth sometimes orange-brown.

The species distribution is in the east of southern Africa, in Tanzania, Malawi and the north of Mozambique. The plant in picture grows in a Melbourne garden in Australia.

The plants grow in open grassland, sometimes among granitic rocks at elevations from 600 m to 2000 m. The wellbeing of the species in nature was considered to be of least concern in the IUCN Red List in 2019 (Reynolds, 1974; Wikipedia; iNaturalist; www.malawiflora.com; www.mozambiqueflora.com).