Home » GENERA A » Aloe » Aloe maculata rosette
Back to Category Overview
Total images in all categories: 11,923
Total number of hits on all images: 7,173,522 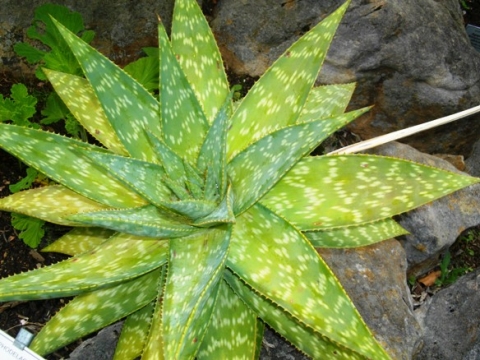 Aloe maculata is named for its leaf spots. Maculata means spotted or blotched. There is, however, a large variety of low growing or stemless, spotted aloes in South Africa that are sometimes hard to distinguish. A. maculata is thought to be one of the easier ones to identify from its fellow spotted species. Whilst quite variable as a species, the flat topped racemes and uniformly coloured flowers contribute to the identification. For some time this plant used to be known as A. saponaria, which brought about the common name of soap aloe.

A. maculata grows in grassland, on rocky outcrops and among open scrub in both summer and winter rainfall areas. It also does well in a variety of soil types. The large distribution area has some discontinuities as the plant occurs in the Cape Peninsula, a section of the southern Cape coastal area and parts of the Transkei, Kwazulu-Natal, Lesotho, the Free State and Zimbabwe.

The leaves are thick and succulent, triangular and spotted all over. Marginal teeth are sharp and brown with no spines on the leaf surfaces. The leaf tips are usually dry and twisted with exceptions caused by the availability of semi-shade and ample water.

The plant in picture is a case in point, growing in the Kirstenbosch National Botanical Garden. Flower colour varies from yellow, orange and red to pink. Flowering time varies to coincide with the dry season (summer in the Cape, late winter in the north-eastern parts).  Plants are mainly stemless, but not always. They grow solitary or form clumps through suckering (Van Wyk and Smith, 2003; Jeppe, 1969).