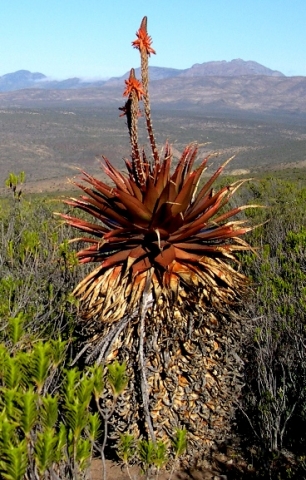 The stout stem of A. lineata is usually covered in dry leaves below the live rosette, although bare lower stems may be seen on old plants. The plant in picture differs in the brownish seasonal leaf discoloration and its open perianths being pink, not yellow. (The yellow colouring raises questions.)

Papery, sterile bracts are scattered more or less spirally around the dark maroon-brown peduncles below the dense covering of withered flowers transforming into fruit. Flower stalks of yesteryear protrude downwards from among the dead leaf detritus.

Flowering happens from midsummer to early autumn for var. lineata, while var. muirii should flower in late winter to spring. The photo was taken early in April, the plant not in keeping with its variety, or affected by the extreme dryness of the 2017 season.

There may be as many as four unbranched racemes presenting flowers partly sequenced; here the three are simultaneous.

A. lineata var. muirii is found in the Little Karoo, from Ladismith to the Outeniqua Mountains and south of the mountains near Riversdale around the Garcia Pass. The other variety of A. lineata is distributed more to the east: var. lineata grows in the Eastern Cape near Addo and as far as Grahamstown, mainly in Suurberg Mountains. Differences include larger marginal teeth and bolder, reddish leaf striations on var. muirii.

The habitat is succulent Karoo, grassy fynbos and renosterveld. A. lineata is not considered to be threatened in its habitat early in the twenty first century (Van Wyk and Smith, 2003; Reynolds, 1974; Jeppe, 1969; http://redlist.sanbi.org).