Home » GENERA A » Aloe » Aloe krapohliana many-flowered, no competition
Back to Category Overview
Total images in all categories: 11,506
Total number of hits on all images: 6,492,048 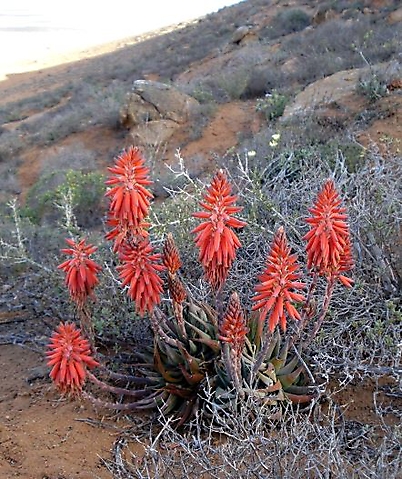 These flowers are partly insect-pollinated, although many insects don’t see red. Most adult insects have compound eyes equipped to distinguish colours, while the spectrum they distinguish is limited. Some insects like honeybees have three types of pigment receptors, trichromatic like people, while others are only bichromatic.

The colour spectrum visible to insects is generally slightly higher in frequency than what people see. This means that some insects can’t see red or all of its range, while people can’t see beyond violet. Insects can see colours in ultraviolet light at the shorter wavelength end of the electromagnetic spectrum.

Don’t worry about it! All extant flowering species have functional pollination arrangements in place, established over long periods and unlikely to require visual aid programmes for service providers soon.

And there are always birds keen on aloe products, as well as post-graduate students to unravel details while enduring bugs, pollen and nectar in exchange for degrees (Van Wyk and Smith, 2003; Reynolds, 1974; Jeppe, 1969; https://indianapublicmedia.org).