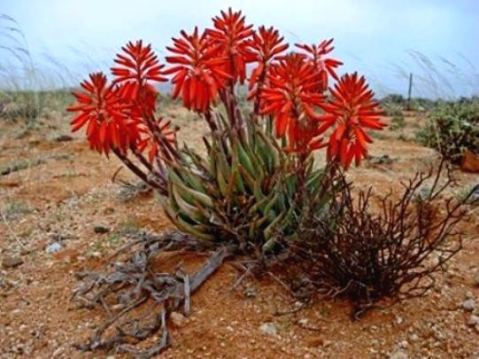 Aloe krapohliana is a dwarf leaf succulent often growing a solitary rosette of leaves and inflorescences up to 40 cm tall. The form that branches into a clump of several (up to 15) rosettes as the plant in picture is no longer recognised as a variety any longer. Usually a stemless plant, only the oldest specimens may have short, visible ones.

The species distribution is in Namaqualand and western Bushmanland from Vanrhynsdorp to the Gariep River from Grootderm to Pella. The photo was taken near Steinkopf.

The plants grow in arid, semi-desert and Nama Karoo conditions in clay, stony and sandy soils on flats and slopes. Solitary plants or scattered groups of them are seen in the veld, not dense stands. The status of the species population in nature could not be assessed early in the twenty first century due to insufficient data.