Home » GENERA A » Aloe » Aloe kouebokkeveldensis
Back to Category Overview
Total images in all categories: 12,087
Total number of hits on all images: 7,392,856 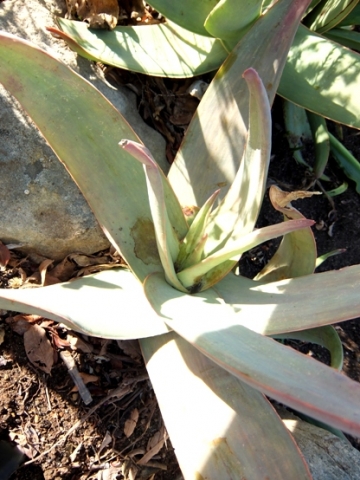 Aloe kouebokkeveldensis is a recent discovery (around 2002) in ravines of the Thee River in the Koue Bokkeveld Mountains. A rare plant, it is only known from the protected area of the Groot Winterhoek Mountain Catchment Reserve and thus stable in habitat.

A cliff dweller in crevices on south-west facing, sandstone slopes of high mountains; it is inaccessible, thus relatively safe.

The presence of San paintings in caves and overhangs of the area makes the “discovery” a rediscovery and raised the question as to possible early uses of the plant, the Aloe genus being so important in ethnic botany and traditional medicine.

This specimen was seen in Kirstenbosch where seedlings have been propagated successfully, maybe also available to the public (Low and Uschi, Veld & Flora, March 2006; iSpot; www.redlist.sanbi.org).