Home » GENERA A » Aloe » Aloe lineata var. muirii inflorescence
Back to Category Overview
Total images in all categories: 12,061
Total number of hits on all images: 7,359,977 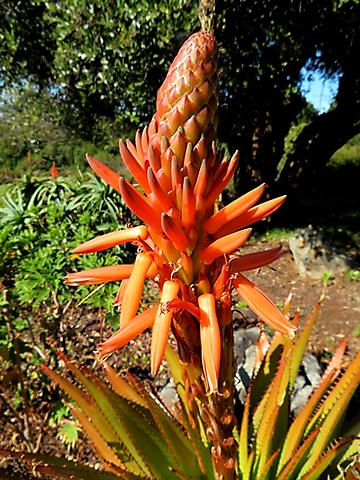 The one to four simple inflorescences of Aloe lineata var. muirii appear concurrently or consecutively. Each somewhat conic raceme becomes from 20 cm to 30 cm long, initially dominated by bracts over every flower or perianth.

The pedicels are about 4 cm long and elongating further during the fruiting stage. The salmon-coloured perianths are between cylindrical and three-angled, from 45 mm to 50 mm long and 9 mm in diameter (near the base). Perianths are very slightly narrower above the ovaries, while in bud dark and narrow near their tips.

Initially appearing flattened by the bracts in the thick cylinder of numerous buds, the freed perianths are angled up before they open. The gradual sagging to the angled down positions occurs concurrently with the opening, when the anthers are exserted from the perianth mouths (Reynolds, 1974).