Home » GENERA A » Aloe » Aloe krapohliana leaves
Back to Category Overview
Total images in all categories: 11,506
Total number of hits on all images: 6,493,973 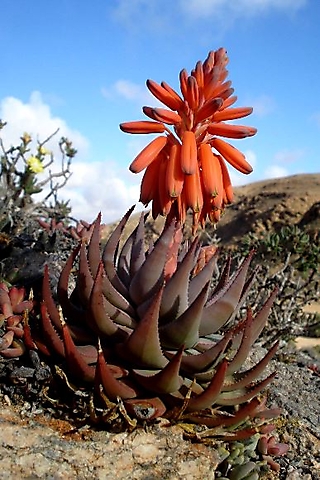 Mature Aloe krapohliana rosettes comprise twenty to thirty leaves. The arched leaves are broad at the base and spreading before curving up. Erect or slightly incurved in their upper parts, they attenuate markedly into narrowly acute tips.

The blades are smooth and grey-green to brownish. The upper surface is flatter than the lower one, sometimes concave but usually also slightly convex as the lower one, never as much. The leaves become 20 cm long and 4 cm wide at the base.

There are no leaf surface spines, lines or dots. Only the margins have rows of small white teeth, about 4 mm long. Transverse, grey-brown bands are sometimes present on the leaves or on some of them. Similar leaf band markings are found on A. cryptopoda, a related species.