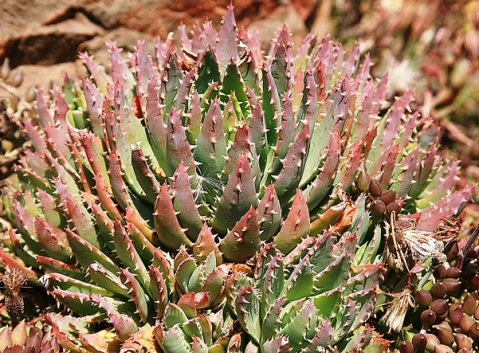 Aloe brevifolia is one of the dwarf aloes bearing branching clusters of compact rosettes. The clump that develops from offshoots at the base forms a shallow dome in mature plants that grow well.

The leaves are short, broad and thick, triangular in shape with the tips curving in gradually. Leaf colour is grey-green to blue-green, sometimes with a pinkish tinge. The surfaces are smooth, apart from the whitish marginal teeth and off-centre keel prickles towards the leaf tips. The inner surface of the leaf is slightly concave, the outer one convex. The leaf sap is clear.

One or two single, slightly cone-shaped racemes are produced per rosette, loosely flowered and up to 60 cm long. The buds are initially covered by fleshy bracts. The bracts continue on the stalk below the flowers to near the base. The outer segments are free, nearly to the base. Perianth colour is mainly bright red or orange, sometimes yellow. Flowering happens from mid-spring to early summer.

The species distribution is only in the Western Cape around Caledon to Bredasdorp and Swellendam. The habitat is clay soils on stony slopes. Most rain is received here in winter, the summers hot.

A. brevifolia var. brevifolia is considered to be vulnerable in its habitat early in the twenty first century; eighty percent of its distribution now under wheat. It used to be known as var. postgenita. The other recognised variety, var. depressa, previously var. serra and found in a smaller distribution only near Caledon, has not yet had its population assessed due to insufficient data (Van Wyk and Smith, 2003; Jeppe, 1969).