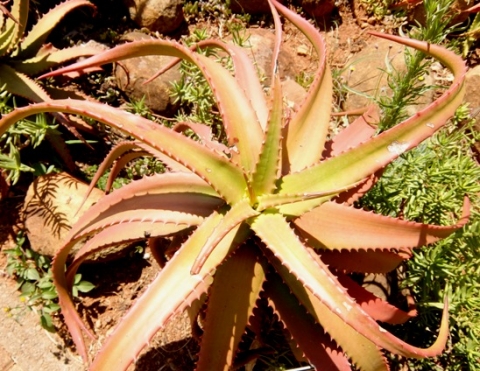 Aloe cameronii, commonly red aloe or Cameron’s Ruwari aloe, is not indigenous to South Africa, but a tropical African species found from Zimbabwe to a Malawi. The plant in picture was photographed in the Walter Sisulu National Botanical Garden during January.

A. cameronii is a medium-sized suckering aloe with several erect stems topped by lax leaf rosettes up to 60 cm in height. The spreading leaves are succulent and smooth, lacking surface spines. The evenly spaced marginal teeth are small, in picture slightly ascending towards the long, narrow and curving leaf tips.

In habitat the winter leaf colour is green to dark green, typically assuming the coppery red shade seen here during summer. The plant in picture may have immigrant adaptation issues, however, being red-leaved in a hot, but wet Gauteng summer.

The species habitat is grass-filled depressions or crevices on granite hills and cliffs, usually in the open, at elevations from 700 m to 1585 m (www.zimbabweflora.co.zw; www.smgrowers.com).