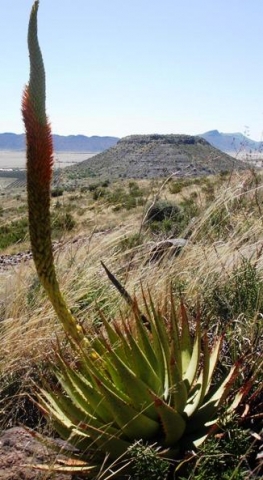 The habitat of Aloe broomii is karoid, being partly in the Great Karoo and Nama Karoo. The plants grow here on ironstone ridges and rocky slopes, often on the north-facing ones in the semi-arid central part of the country.

The plant usually grows solitary, found at elevations from 1000 m to 2000 m. Rainfall in this region is 250 mm to 375 mm, mainly received in late summer convection storms. The summers are hot here, the winters cold.

The species is not considered to be threatened in its habitat early in the twenty first century (Reynolds, 1974; Van Wyk and Smith, 2003; Jeppe, 1969; iSpot; www.redlist.sanbi.org).