Home » GENERA A » Aloe » Aloe arborescens raceme
Back to Category Overview
Total images in all categories: 9,840
Total number of hits on all images: 4,471,864 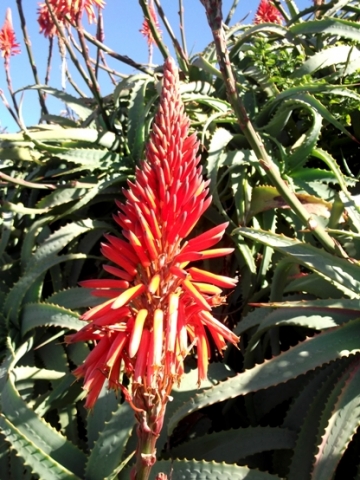 The conical shape of the Aloe arborescens raceme is achieved by its short, uppermost buds pointing upwards and briefly remaining positioned close to the stalk. Those in the centre swollen to fuller size gradually sag to point outwards, while the mature ones near the base are angled downwards, their anthers and stigma protruding, adding length.

The initially short pedicels manage the weight of the young flowers well, the older flowers increasingly too heavy for their longer but not much stronger pedicels.

Perianth colouring is pale and grey to greenish in the underdeveloped buds at the tip. The flowers gradually gain flamboyance by acquiring prouder colouring in their garb as they grow. Only the perianth tips lag in the changing of the colours until the moment of opening is near.

Once the pollinators have been beguiled and entertained, there is no longer a need for cosmetics in the spent flower that has accomplished its mission. Withering of A. arborescens flowers happens all too quickly, often accompanied by disappointment at the show passing so soon.

The short and broad, papery bracts below the inflorescence on each peduncle are beige to purplish, little noticed in the presence of flowers. Aloes often produce more floral bracts to subtend the pedicels of the flowers than actual flowers, leaving these seemingly superfluous bits fluttering on the stalk.

Maybe the planning was in place to produce more flowers, but the resources ran out. Some inflorescences may in lean times also fail to open their last few perianths right at the top of the raceme.