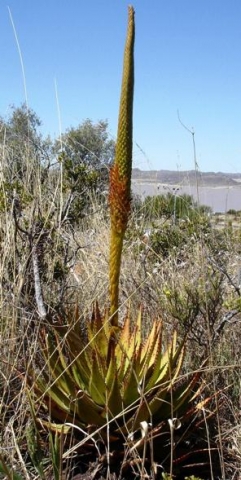 The flowers of Aloe broomii grow in a robust, dense raceme that is usually unbranched. Only one or two (rarely three) of these racemes appear annually per rosette, from late winter to mid-spring. The many-flowered inflorescence is erect and long; up to 1 m and also narrow, only about 7 cm wide.

The peduncle is flattened near the base and more cylindrical higher up. It is dark brown in colour, covered in many papery bracts. Each flower is short and broad, up to 2,5 cm long and pale yellow in colour.

An unusual feature of these flowers is the (pale yellow) perianth being completely covered by its golden-green, pointed bract. Only the exserted (protruding from the perianth) stamens and stigma are revealed for pollinator benefit, but the visitors are still eager as every perianth promises a (little) nectar reward. The bracts form a dense, imbricate pattern, overlapping like roof-tiles on the surface of the cylindrical shape. The exposed filament parts become orange in colour.

There is a less common variety of A. broomii, viz. var. tarkaensis in the far southeast of the distribution that grows smaller bracts. This allows parts of the perianths (corollas) some visibility. This variety flowers later, near the end of summer to early autumn (Reynolds, 1974; Van Wyk and Smith, 2003; Jeppe, 1969; iSpot).