Home » GENERA A » Aloe » Aloe africana stages of flowering
Back to Category Overview
Total images in all categories: 9,840
Total number of hits on all images: 4,471,907 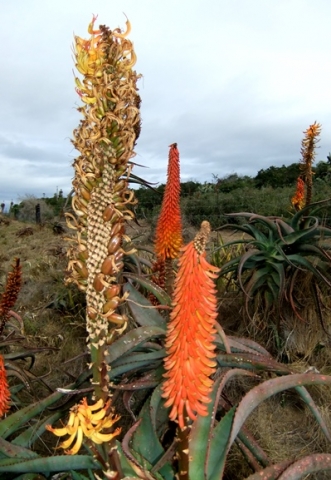 Aloe africana inflorescences in several stages of development tell a story of changing shapes. The earliest raceme was the tallest, had a better deal when the plant was prepared and resources were plentiful. It now sports bulging green and browning fruit, shiny where the persisting perianths do not cover them. Many bare stalk spots where fruits did not form indicate the toughness of the times for these plants.

This message is conveyed more strongly by the few yellow flowers open on the brave but deficient short raceme low down on the left in the picture: One does what one can with the hand one is dealt, however meagre the allotted nutrients may be.

Other inflorescence parts in view show variable fortunes in the number of fruits produced and in the uneven promise of flowers yet to perform. The writhing and twisting of the long leaves in the rosettes below are in sync with the hard times message conveyed by this aloe community.

Flowering of A. africana usually happens from midwinter to early spring, but the occasional inflorescence may be spotted at other times; the life rule being that no chance is to be missed without a diligent effort (Reynolds, 1974; Van Wyk and Smith, 2003; Jeppe, 1969; Coates Palgrave, 2002).